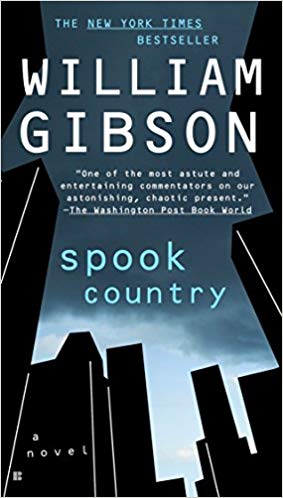 Part of the Blue Ant Trilogy

The first strand of the novel follows Hollis Henry, a former member of the early 1990s cult band The Curfew and a freelance journalist. She is hired by advertising mogul Hubertus Bigend to write a story for his nascent magazine Node (described as a European Wired) about the use of locative technology in the art world. Helped by curator Odile Richard she investigates Los Angeles artist Alberto Corrales, who recreates virtually the deaths of celebrities such as River Phoenix. Corrales leads her to Bobby Chombo, an expert in geospatial technologies who handles Corrales' technical requirements. Chombo's background is troubleshooting navigation systems for the United States military. He is reclusive and paranoid, refusing to sleep in the same GPS grid square on consecutive nights, and only consents to talk to Hollis due to his admiration for The Curfew.

Tito is part of a Chinese Cuban family of freelance "illegal facilitators", as Brown describes them – forgers, smugglers, and associated support personnel based in New York City – and is assigned by his uncles to hand over a series of iPods to a mysterious old man. Tito is adept in a form of systema that encompasses tradecraft, a variant of free running, and the Santería religion. It is alluded that the old man may have connections to American intelligence circles and Tito hopes he can explain the mysterious death of his father. When the old man calls in a favour, his family dispatches Tito on a dangerous new assignment.

The identity of the old man remains unclear, though context implies that he may be Pattern Recognition's protagonist Cayce Pollard's father, having removed himself from the channels of normal life to focus on disrupting what he sees as criminal elements operating in the United States Government.

Tracking Tito's family is a man known as Brown, a brusque and obstinate lead covert operative for a shadowy organization of unclear connection to the U.S. government. Of neoconservative orientation, Brown appears to have a background in law enforcement, but little training in tradecraft. Brown and his team attempt to track the activities of the old man and Tito with the help of Brown's captive Milgrim, whom he has translate the volapuk-encoded Russian used by Tito's family to communicate. Milgrim is addicted to anti-anxiety drugs, and is kept docile and compliant by Brown, who controls his supply of Rize. Brown believes that Tito and the old man are in possession of information that would, if revealed, undermine public confidence in the U.S.'s participation in the Iraq War. In his attempts to capture them and their data, however, Brown is instead fed disinformation through the old man's intricate schemes.

The three strands of the novel converge on a shipping container of unspecified cargo that is being transported via a circuitous route to an unknown destination. In Vancouver, the old man's team, with Hollis in tow, irradiate the shipping container, which is revealed to contain millions of U.S. dollars diverted from Iraq reconstruction funds.