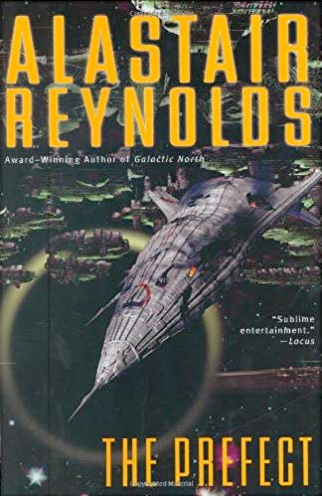 The Prefect is set in the 25th century in the Glitter Band, the realm of thousands of orbital habitats surrounding the planet Yellowstone in the Epsilon Eridani system, and the height of human civilization at the time. Events take place prior to the advent of the Melding Plague that had already ruined the Glitter Band and caused a massive decline in Yellowstone civilization at the time of the other Revelation Space novels. Tom Dreyfus is the titular prefect, a member of a special investigations police force called the Panoply that is responsible for protecting the Glitter Band.

The novel offers a thoroughly in-depth study of future technology, including augmented reality within the Revelation Space universe, due its unique setting in the time-line. Set a century before the devastating effects of the melding plague, the book is able to showcase the golden age of mankind alluded to in earlier books. The Glitter Band is a group of ten-thousand orbital habitats orbiting Yellowstone with a population of 100-million humans.

All habitats in the glitter band represent a different format of society, all linked by the common right to vote. A giant computer network runs thousands of polls everyday to decide the general actions of the Glitter Band as a whole. Most inhabitants have built in computer routines in their brains that make these decisions for them, making a conscious effort on only the most important polls.

Every habitat has a polling core, a giant computer that generates the polls and transmits the inhabitants’ votes. Each habitat votes on its own laws and punishments, the only universal crime being withholding someone’s right to vote, fraudulent voting, or restricting someone's access to abstraction (a form of digital communication and virtual reality used throughout the Glitter Band).

The right to vote and access abstraction for each inhabitant is policed by the Glitter Bands’ security force, Panoply. Chasm City is policed independently, and most habitats have their own internal constabulary forces to police other crimes.